Beresta is the outer layer of the birch bark. Even in ancient times man learned to use birch bark and its unique properties in everyday life. 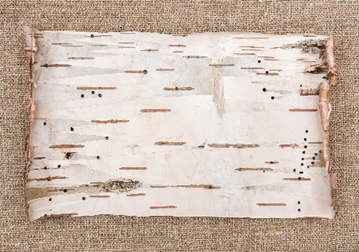 During archaeological excavations in the Kargopol area, the Arkhangelsk region, a human settlement dating back to the Mesolithic epoch, 6-8 ths. years BC, was found. In ancient deposits of peat, various objects made of birch bark were preserved: boxes-tues, knobs for bone knives. In addition, birch bark served to cover roofs, floors, walls, making simple utensils and as an auxiliary material for binding, wrapping. In the settlement of Berendeevo, discovered near Pereslavl, archaeologists found a burial dating back to the 3rd millennium BC. e. The man was buried, wrapped in a wide birch bark cylinder of 3 layers. Despite the moist soil, the birch bark has very well preserved itself and preserved the remains of our distant ancestor. Excavations in ancient Novgorod brought in more than 4000 fragments of birch bark products, many of which were decorated with embossing, carving, and painting.

Ancient birch bark products were found in other regions of the globe. For example, in the tomb of Tutankhamen,14th century BC, and in the graves of the Scythians — the 2nd millennium BC.

Later, in the peasant way of life, birch bark has firmly taken its place as a building material, as well as a material for making dishes, clothes and shoes, furniture, toys. Our ancestors used containers from birch bark to store perishable products: fish, meat, milk, bread.

What ensured such a wide distribution of this natural material? Of course, these are unique properties of birch bark:

It is even believed that the scent of birch bark has a beneficial effect on the nervous system, soothes, restores energy and relieves headache. Birch bark items take away bad emotions, soothe, bestow with warmth. Birch in Russia has always been considered a tree of health.

Products made of birch bark are very light and at the same time strong enough, they keep the shape well. And they keep the heat even in cold rooms and are very pleasant to the touch.

Harvest birch bark in early summer, late May — June, when the birch is full of juices, and the birch bark easily lags behind the rest of the bark.

There is one more aspect, characteristic for birch bark objects. They are easily handled: folded, cut, weave. These properties allow masters to create not only useful, but also very beautiful products. In Russia, birch bark was used almost in all regions from the western regions to Kamchatka, from the Far North to Transcaucasia.

Masters working with birch bark, never paint it, do not cover with varnish. This preserves the natural beauty of natural shades and the properties of a unique material. Sometimes to protect from external influences and shine, the products are rubbed with natural wax.

Birch bark utensils can be decorated in various ways: embossing, carving, painting, applique, weaving. For different regions of Russia historically there were different techniques of processing birch bark, as well as ornaments and typical patterns applied to it.

The Verkhneuftyuzhskaya painting of birch bark products is widely known. The painting is made by dry powder paints with the addition of glue. With any background color, the masters select the appropriate soft, quiet range of colors, skillfully including traditional colors — blue, pink, white, light purple, green, brown. The main motifs for painting are images of twigs, flowers and birds. 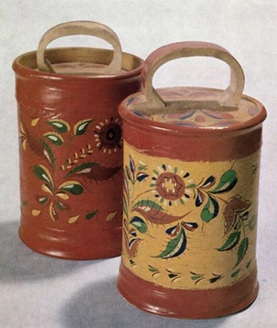 In Severodvinsk birch bark products, we meet with the motifs of the painting, transferred from wooden spinning wheels, cradles, broths and birch bark booths, and in Gorodets products patterns from the basis of distaffs.

Shemogodskaya cut through birch bark is perhaps the most famous birch bark craft in Russia and  abroad. The name of the artcraft was received from the river Shemoksy, flowing into the Northern Dvina below Veliky Ustyug. Elegant floral ornament adorns the walls and covers of products. Beresta on a dark or golden background looks like expensive material.

Tues artcrafts existed in the Vologda and Vyatka regions. Even Vyatka province was famous for its craft of birch bark walking sticks, fashionable among the townspeople in the XIX century. Birchbark walking sticks were light and strong, and looked great.

In the Olonets Gubernia, there was fishing for birch-bark ropes and cheap horse harness.

In the lower area of the Chusovaya River near Perm there was a large center of production of tueses with embossing. Embossed geometric ornamentation, consisting of rhombuses, crosses, diagonal and vertical strips, asterisks, zigzags, covered birchbark tues from top to bottom and did not violate the integrity of the material.

In the vicinity of Nizhny Tagil, in addition to the embossed tues, they made painted tuesa and decorated with decals.

In the Tobolsk and Tomsk provinces birch-bark crafts of toes and "kiska" are known. Kiska is a kind of carpet up to 2 square meters, which was used to protect against rain. Known birch-bark fisheries in Ryazan, Mogilev, Nizhny Novgorod regions and Transcarpathia.

Beresta is very easy to care. Items made of this material can and should be washed in warm water and even in a dishwasher! After washing, they acquire a special softness and elasticity, without losing shape and drying up again become dense. Beresta loves moisture, and the objects made of it must be periodically wiped with a damp cloth. Otherwise, they can become brittle and fragile.

If birch bark products are properly taken care of, they will always have an attractive appearance, and will serve for a long time.

Products from birch bark became a Russian brand, known outside the country. Such souvenirs attract attention, are appreciated for originality, beauty and ecological compatibility. They are presented to the heads of international delegations, public figures, leaders of states as a symbol of great Russian culture, a sample of folk crafts. 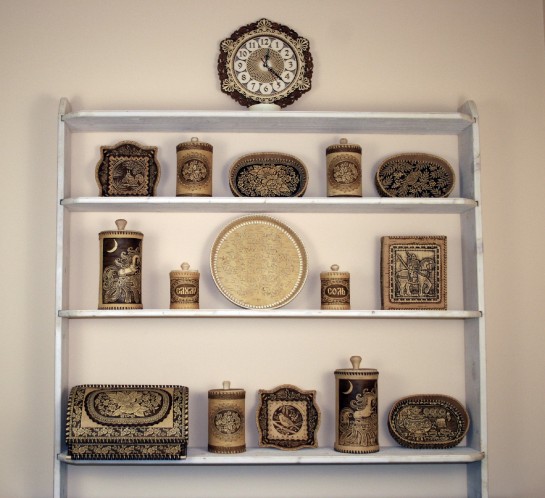 By purchasing any object from the birch bark, you get a functional, beautiful, ecological and good product for the physical and emotional health.

When the currency is changed cart will be cleared.